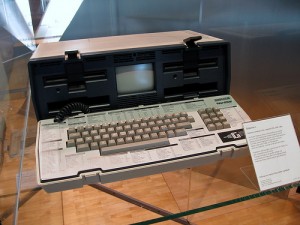 Sleek, lightweight, user-friendly and powerful – that’s probably what you think when you see the laptops of today. But there was a time when the average laptop was larger, chunkier and a bit slower. It’s amazing how laptops have evolved in a span of three brief decades.

It’s also amazing how laptops are commonplace in today’s tech-driven world. In 2010, Pew Internet learned that as many American adults owned a laptop as did desktop computers – 55 percent compared to 62 percent, respectively.

As early as the late 1960s and early 1970s, there were attempts to shrink the average computer down to a portable size. The foundations of the laptop (and the tablet, for that matter) come from the Dynabook, a project started by tech pioneer Alan Kay prior to joining Xerox PARC (Palo Alto Research Center). As Time noted in a recent interview with Kay, elements of the Dynabook are present in nearly every modern portable computer.

While the Dynabook outlined the future of portable computing, the Osborne 1 took the honor of being the first laptop computer – at least as far as most historians are concerned. Introduced in 1981, the Osborne 1 weighed in at a beefy 24.5 pounds and an equally beefy price tag of $1795 ($4,600 in today’s dollars). For their money’s worth, buyers got a 4 MHz Z80 processor, 64K memory, a small five-inch monitor and a bundle of software applications.

It wasn’t until 1985 that tech-heads would see a laptop that one could sit on their laps. The Toshiba T1100, considered the first mass-produced laptop that used the now-commonplace flip-top, weighed in at a comparatively svelte nine pounds. According to PC Magazine, the T1100 sold for $1,899 – but it didn’t come with an internal hard drive.

Most of the early laptops weren’t all that portable – they were usually heavy, awkward to carry around and had a relatively short battery life. But throughout the 1990s and early 2000s, manufacturers worked to make laptops lighter in weight, smaller in size and more powerful, to boot. It also helped that each successive wave of laptops also became cheaper, resulting in today’s sub-$300 budget machines.

IBM’s 5.7-pound ThinkPad 700C was full of firsts – not only was it the first to offer a 10.4-inch color screen, it was also the first ThinkPad to feature the company’s ubiquitous TrackPoint pointing stick, a feature carried over beyond Lenovo’s acquisition of the ThinkPad line in 2005. Lenovo’s new Ultrabook lineup continues to lead the way towards lighter, smaller and faster laptops.

Meanwhile, Apple released the Macintosh PowerBook series, the predecessors of the company’s earlier Macintosh Portable. These laptops would eventually evolve into the modern MacBook and MacBook Pro systems. Like Lenovo, Apple also has its own ultra-light laptop offering in the form of the sleek and thin MacBook Air.

Jacks of All Trades

Another type of laptop has appeared in recent years, combining the convenience and ease-of-use that a tablet offers with the overall utility of an ordinary laptop. Convertible laptops feature high-quality touchscreens that fold or swivel backwards to offer users the flexibility of a tablet without sacrificing the power and utility a laptop offers. Even traditional laptops are starting to offer touch screens, mostly to take advantage of Windows 8’s unique tablet-oriented user interface.